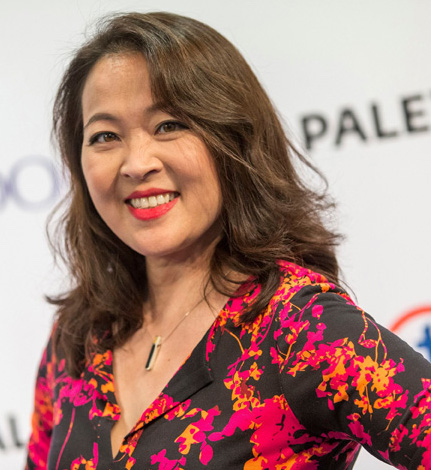 Suzy Nakamura, a familiar face from The West Wing, Dr. Ken, Curb Your Enthusiasm, Modern Family, Veep, and over a hundred film and TV credits, is in London shooting the second season of Avenue 5, Armando Iannucci’s (Veep, The Thick of It, The Death of Stalin) comedy starring Hugh Laurie (left) about an interstellar cruise ship that gets knocked off course and struggles to return to Earth. Suzy talks about her journey from Second City to Los Angeles in the 90s; the early rounds of auditions; adventures in babysitting; the rewards and challenges of being in the room; memories of sitting around LA’s Farmer’s Market; fond recollections of the London A-Z Street Atlas; the origin story of the character of Ginger from The West Wing; the pleasure and catharsis of playing characters wildly different from yourself; being told to quiet down from the Harry Potter tour next door; love for Iannucci’s The Personal History of David Copperfield; and extolling the talent and genius that is Hugh Laurie. (Length 19:19)