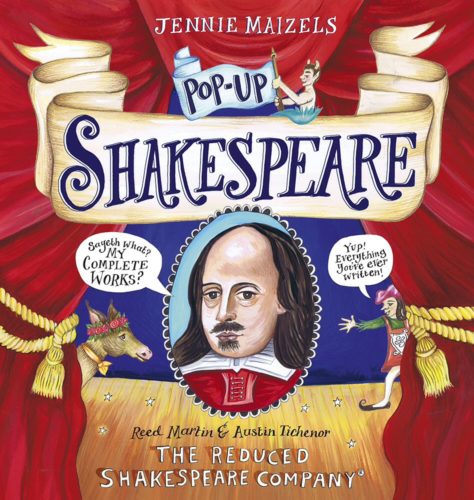 “It’s hard to imagine a more entertaining way to get a sense of what these classics are about!”
Publisher’s Weekly (starred review)
(Read the whole review here)

“Wondrous! Buy it for yourself and pretend it’s for the kids…”
Shakespeare Magazine (see full tweet below)

“Our dog chews a lot of pop-up books and she loved yours!”
Scott Simon, National Public Radio’s “Weekend Edition” (listen to his interview with the authors here)

Buy it from Bookshop right now!

“An absolute treat that serves as an accurate if often irreverent introduction to the Bard. Plenty of insights alongside the laughs. An ideal gift book!”
The Irish Times (read the whole review here)

“Just, wow…I really can’t speak highly enough of this amazing book. It is so well thought out, so well designed and an absolutely perfect way to introduce Shakespeare to younger audiences.”
Kids’ Book Review (Australia) (read the whole review here)

“Stunning! Brings Shakespeare to life in a way we don’t experience with the plays!”
Huffington Post (read the whole review here)

Order from Amazon (US) here!

Find online alternatives to Amazon in the US here and in the UK here! The Romances (including the Sonnets)! “The Reduced Shakespeare Company offers a delightfully irreverent tour of work!”
Publisher’s Weekly (Did we mention it was a starred review?)

“Quite entertaining, even if it is not a long lost Shakespeare play!”
Michael Witmore, Director, Folger Shakespeare Library

“A-MAZING! A huge bit of joy for a Shakespeare nerd like myself. So good.”
Samuel Taylor, author of My Life with the Shakespeare Cult and co-founder of Chicago’s Back Room Shakespeare Project

Authors Reed Martin and Austin Tichenor tell you all about it (filmed April 23rd, Shakespeare’s birthday, 2017)!

Flip through the pages of POP-UP SHAKESPEARE with artist Jennie Maizels!

“The Bard’s complete works as they’ve never been seen before. A spectacular novelty book crammed with jokes, facts, pop-ups and lift-the-flaps.”
The Bookseller

“Highly recommend! Tons of jokes, facts, and gorgeous illustrations!”
Ken Ludwig, author of Lend Me A Tenor, Crazy For You, and How to Teach Your Children Shakespeare

Hear artist Jennie Maizels talk about the creation of the book here on the RSC Podcast!

“My new favorite picture book. A must-read for Shakespeare kids of all ages…the pop-up art alone is AMAZING.”
Nicole Galland, author of I, Iago and (with Neal Stephenson) The Rise and Fall of D.O.D.O.

POP-UP SHAKESPEARE by the @The Reduced Shakespeare Company…My new favorite picture book. A must-read for… https://t.co/hKmLj9wxD7

Order from Amazon (US) here!

Find online alternatives to Amazon in the US here and in the UK here!

Meet Nancy, our favorite new member of the other *other* RSC, the Robinson Shakespeare Company @RCLC_Shakes, striking her best Hamlet pose with her favorite #popupshakespeare! ❤️💀 pic.twitter.com/fNCHTM2UfJ

“My kids so enjoyed Pop-Up Shakespeare! Oh, who am I kidding? I haven’t let them near it.”
Louis Bayard, author of Mr. Timothy, Lucky Strikes, and the New York Times obituary for William Shakespeare

My kids so enjoyed POP-UP SHAKESPEARE by @reduced! Oh, who am I kidding? I haven't let them near it. https://t.co/YkuSWL1qZy

“Five stars! Humorous and cheeky… (it) breaks stereotypes of how Shakespeare should be learned or experienced.”
Play Shakespeare
(Read the whole review here!)

“Finally, the correct format for Shakespeare scholarly discussion. Accessible, funny, illuminating – a fantastic introduction to the Bard’s work.”
Jasper Fforde, author of The Eyre Affair, Something Rotten, and The Last Dragonslayer

Yes @reduced @austintichenor @ReedofRSC @jenniemaizels – I really am this excited that this arrived. What a FANTASTIC book. Thank you all for this treat. pic.twitter.com/WrHP5GCw1O

Parents are weighing in too!

@jeffmarlow Thank you so very much for this delightful book. As you can see it’s been put to use already. Shakespeare’s alive and well. “ Is that William Shakespeare Daddy?” pic.twitter.com/oBIxEVzkDL

(Lauren Gunderson is the author of The Book of Will, a comedy about the creation of Shakespeare’s First Folio, and the most-produced playwright in America in 2017-2018!)

If you have a picture of you and/or your child enjoying Pop-Up Shakespeare, tweet it to us @reduced and we’ll post it here!