Peter James Smith and William Duffy played Washington power couple, comedy duo, and the Rosencrantz and Guildenstern of the White House, Ed and Larry, for seven seasons on Aaron Sorkin’s The West Wing, plus the special reunion event A West Wing Special now streaming on HBO Max. On this 2020 Election Eve, Duffy and Peter discuss how they got their roles, how the roles evolved, and the adventure of playing them. Featuring good rapport; having a history with Aaron Sorkin (Duffy) and not knowing who he was at first (Peter); the power of fan message boards; how it stayed fun but never got completely comfortable; falling back into rhythms; and the privilege of being involved with a show that’s lasted much longer than just its original seven seasons. (Length 24:37) 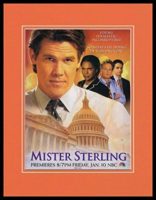 Here’s Part Two of our conversation with the host of MSNBC’s “The Last Word,” Lawrence O’Donnell, who talks about Mister Sterling, the show he created that starred Josh Brolin as a newly-appointed senator from California who everyone assumes is a Democrat. (Part One of our conversation is here.) Lawrence shares behind-the-scenes tales of TV production; his favorite bits of direction; the real-life sources of drama and inspirations for fictional characters; the identity of the so-called “101st Senator;” how actors remember forever the parts they don’t get; how casting sessions work (and don’t work); games senate staffs play; shout-outs to great and important mentors; the possibilities and challenges of rebooting Mister Sterling or any shows like it; the extraordinary journey it took to realize multiple Tony-winning actor Audra McDonald was right for a role; things you can still shoot in quarantine; and, in a 17-year-old journalistic coup — and after 700 episodes — Finally! The RSC Podcast has its first scoop! (Length 34:06) Comedy author and West Wing nerd Gary Rudoren joins us this week to remember Aaron Sorkin‘s television classic The West Wing. Featuring the prescience of certain story lines, behind-the-scenes gossip from the first season’s twelfth episode “He Shall, From Time To Time”, the mysterious connections between all the various television shows set in Washington DC, the prickly conscience of Toby Ziegler, and for those who prefer their politics non-fictional, a special appearance by NPR’s Political Junkie Ken Rudin. What’s next? (Length 21:04)