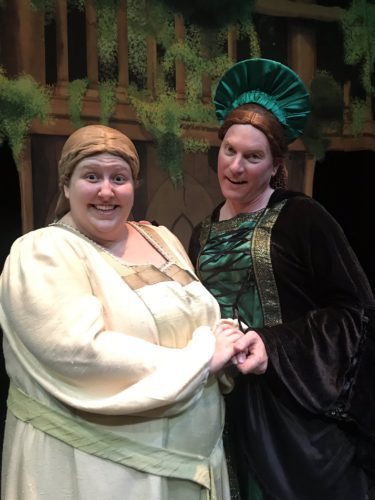 The RSC’s 11th stage show, Hamlet’s Big Adventure! (a prequel), is really all about Hamlet’s best friend Ophelia, at least according to Jessica Romero, who originated the role in the workshop production, and Austin Tichenor, who co-wrote the script and will be playing Ophelia this fall in California and Israel. Hear them chat about reconciling the many interpretations of Ophelia, and discuss professional memorization methods, weaponizing feelings, how one person’s comedy can be another’s tragedy, shared inspiration from Taming of the Shrew (both pirate- and commedia-themed), playing bucket-list roles, favorite Shakespeare characters, and the reality of the curse of saying the title of the Scottish Play. (Length 23:09) (Pictured: Jessica Romero as the King (with Peter Downey as Hamlet) and Ophelia (with Chad Yarish as Yorick) in the Shakespeare Napa Valley workshop of Hamlet’s Big Adventure (a prequel). Photos by Julie McClelland.)