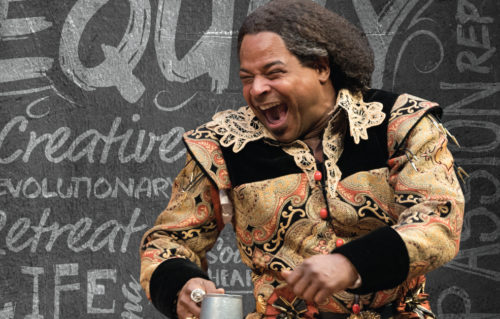 Kevin Kenerly is a 22-year veteran of the Oregon Shakespeare Festival and is currently playing Richard Burbage in Lauren Gunderson’s The Book of Will (after having played Burbage in Shakespeare in Love in 2017). Kevin talks with Austin Tichenor (who played Burbage in the Northlight Theatre production in 2017 and blogged about it for the Folger Shakespeare Library) about his approach to playing Shakespeare’s leading man, how he first came to Shakespeare, how the role of Burbage resembles Cyrano de Bergerac, inspirational teacher shoutouts, impressive instruments, the magic of different interpretations, a love for language, the pleasure of needing no clue, Michael Caine aphorisms, how theatre sleeps when we do, and ultimately how Shakespeare and microbrew prove to be an unbeatable combination. Featuring a special appearance from Lauren Gunderson herself! (Pictured: David Kelly as Henry Condell, Kevin Kenerly as Richard Burbage, and Jeffrey King as John Heminges. From the Oregon Shakespeare Festival production of Lauren Gunderson’s The Book of Will, directed by Christopher Liam Moore.) (Length 22:56)