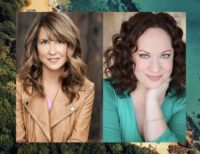 Brave new world, indeed: Globetrotting Shakespeare is presenting a live and virtual performance of The Tempest on Saturday, July 11, 2020, featuring multiple actors in four different countries and at least six time zones from Shakespeare Napa Valley, Shakespeare by the Sea, Prague Shakespeare Company, Atlanta Shakespeare Company at the Shakespeare Tavern Playhouse, and Shakespeare at Notre Dame. Directors Jennifer King (l) and Suzanne Dean (r) discuss how the project came together; how they see challenges as opportunities to create relationships and communities through Shakespeare; how they’re seizing this opportunity to Rethink, Reframe, and Resume; the unfortunate problems with technology; how a disruptive pandemic has its own tempestuous qualities; and how we must continue finding (despite sometimes losing) our humanity in crisis. (Length 19:27) Back in October of 2017, we had the great good fortune of visiting Prague Shakespeare Company in the beautiful Czech Republic, and we got to speak with Jared Doreck, Steve Josephson, and John Boston, the cast of PSC’s production of William Shakespeare’s Long Lost First Play (abridged). Featuring expat adventures, working with Ray Bradbury, bilingual productions of The Winter’s Tale, crazy performance schedules, multiple casting in repertory, playing in Mozart’s footsteps, getting to play the coveted role of Tiberio, bows that go on forever, and the craziness of completing Shakespeare’s entire canon in a single year — including Shakespeare’s long lost first play! Recorded LIVE at Prague’s famous Cafe Louvre. (Length 20:45)