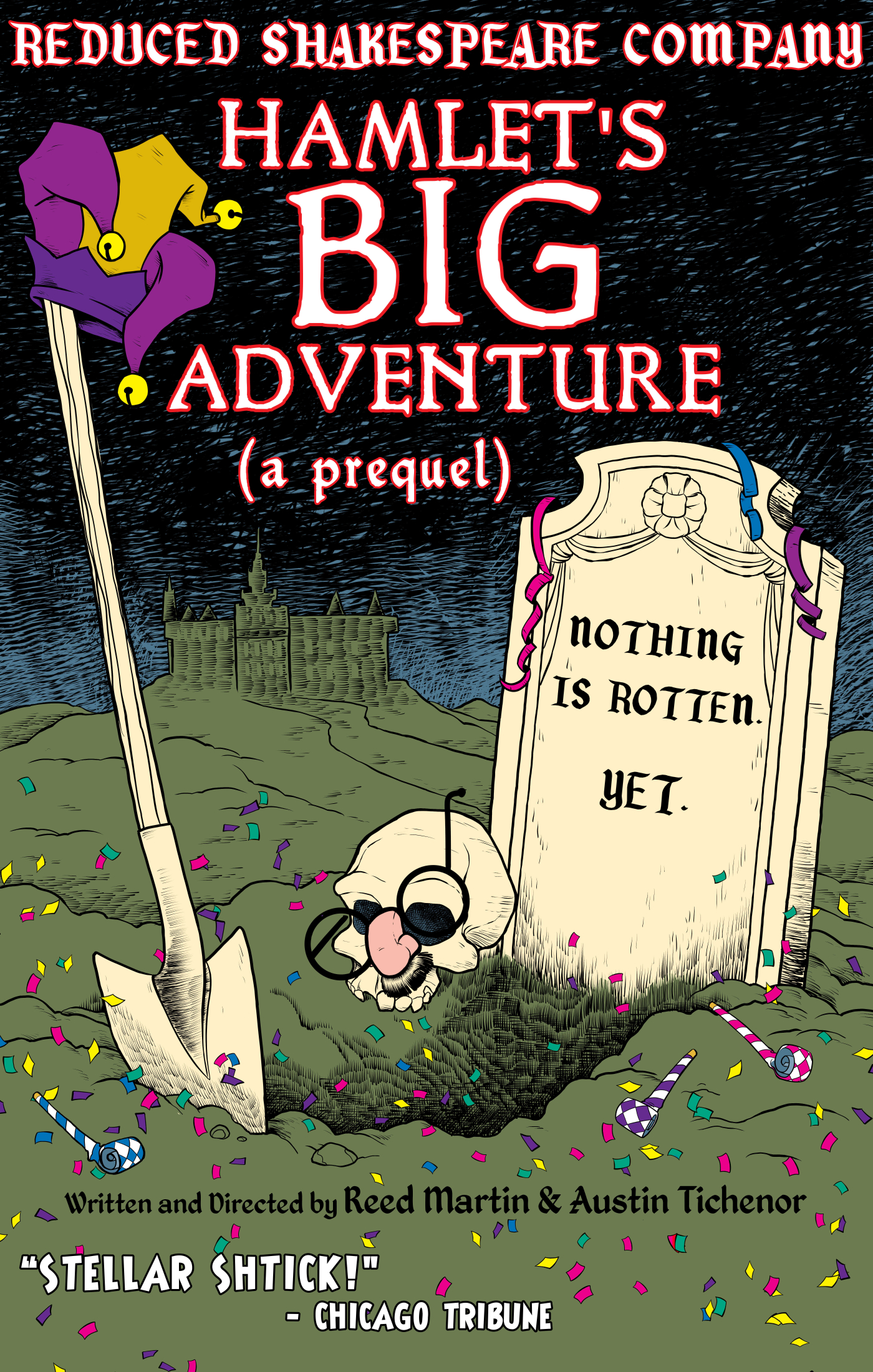 It’s the comedy of the prince of Denmark! Hamlet’s Big Adventure (a prequel) will be the eleventh stage show performed by the Reduced Shakespeare Company and the tenth RSC script by Reed Martin and Austin Tichenor, who discuss the origins of the script; where it’s being workshopped as part of Napa Valley College’s Emergence Festival; how the transitive property applies to ranking plays; the incredible insight given to us by our dramaturg Kate Pitt; echoes of Hamlet as well as Henry IV Part 1; the feeling of being both Queen Elizabeth demanding a new play about Sir John Falstaff and the Shakespeare who gets to write it; the hesitation of getting rid of our usual framing device; the challenge of creating a comedy that’s funny to people who don’t know the original; the balancing act of finding the right ratio of highbrow to lowbrow; and the fun of answering questions inspired by Shakespeare’s original tragedy. Poster art by the incomparable Lar DeSouza. (Length 20:45)

”We’re deep in rehearsal for the world premiere of William Shakespeare’s Long Lost First Play (abridged), which we open next week at the Folger Theatre in Washington, DC. And naturally, being this close to a major opening, the anxiety dreams known as “the actor’s nightmare” have begun to strike. Cast members Read more…

”No, not Cardenio. Not Double Falsehood. In a strangely treasure-filled car park in Leicester, we have stumbled upon the literary holy grail — William Shakespeare’s Long Lost First Play (abridged). The RSC’s tenth stage show will premiere in April 2016 at the Folger Shakespeare Theatre in Washington DC, and this week Read more…

”LIVE! from Salt Lake City Airport comes this very reduced episode of the Reduced Shakespeare Company Podcast. Featuring teases about the new script, rookie mistakes, no editing, almost-zero music, and shout-outs to the magnificent folks who worked Delta’s gate B6 (but not their food truck drivers). (Length 7:10)

”Playwright Sara Gmitter talks about her new play In The Garden: A Darwinian Love Story (now getting its world premiere at the Lookingglass Theatre Company in Chicago), which explores the long and successful romance between Charles and Emma Darwin: A woman who believed in God and heaven and salvation — Read more…

”A production manager’s job is never done. Phil Rundle from Cincinnati Playhouse in the Park talks about the challenges of his job, which right now includes designing the set for the world premiere of The Complete History of Comedy (abridged), and shares with us surprising complications, interesting thematic elements, creative juggling, Read more…

”On the opening weekend of The Complete History of Comedy (abridged), authors Reed Martin and Austin Tichenor reflect on how their early comic influences have inspired the writing of the show. Featuring favorite movies, formative stand-ups, fundamental lessons, a celebration of Blackhawk Films, and the importance of parents with excellent Read more…

”Dodds Delzell, Dan Saski, and Chad Yarish have performed many of our “Complete (abridged)” scripts with various theatre companies in the northern San Francisco Bay Area. They acted in the very first non-RSC productions of “The Complete World of Sports (abridged)” and “The Ultimate Christmas Show (abridged)” and discuss the Read more…