Spend an Afternoon with The Remote Shakespeare Company! 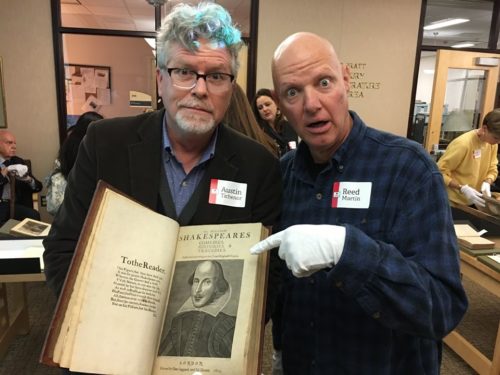 Authors and Reduced Shakespeare Company co-artistic directors Reed Martin and Austin Tichenor will tell RSC tales, take audience questions via Chat, show video clips, play audio from radio and podcasts, and present rarely-performed RSC material and readings from RSC books and radio shows, including a scene from Hamlet’s Big Adventure! (a prequel). A good (socially distanced) time will be had by all!

Reston Center Stage and the Reduced Shakespeare Company have one of the longest and best relationships in show biz history (which, we know, given that most showbiz romances last about three weeks is a very low bar). But the RSC has performed in Reston every single year since 1987, including the very special and unprecedented 2014 extravaganza of The Complete Works of the Reduced Shakespeare Company (abridged) in which the RSC performed seven of its then-nine shows over two glorious weeks.

And since it’s remote, you’ll be able to enjoy all of the RSC’s typical smart, irreverent humor without their usual annoying odor.

“Intellectual rigor leavened by silliness of the first degree.” Variety