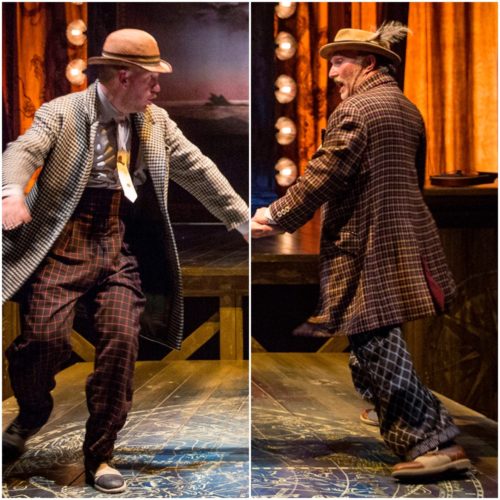 Adam Wesley Brown (left) and Ron E. Rains (right) played Stephano and Trinculo in the 2015 Chicago Shakespeare Theater production of The Tempest directed by Aaron Posner and Teller, and for no reason other than we’re huge fans, they discuss the rewards of playing Shakespearean clowns (these two in particular). Featuring the wonder of immediate connections at the auditions; the occasional difficulty of calling it ‘work’; shout-out to Zach Eisenstat and Manelich Minniefee from Pilobolus Dance Company, who played an eight-limbed, two-headed Caliban; the beauty of being a bit factory; the dramaturgical importance of clowns, and realizing that if the most memorable character in Hamlet is the Gravedigger you’ve done something wrong; how it behooves young actors to get some musical skills, and how a knowledge of music helps particularly with speaking Shakespeare; how you must always fight for the biggest flask; how we didn’t even discuss Ron also being The Onion’s Film Critic, Peter K. Rosenthal; and the importance of learning that, when in doubt about a joke, make it sexual. (Length 23:05)