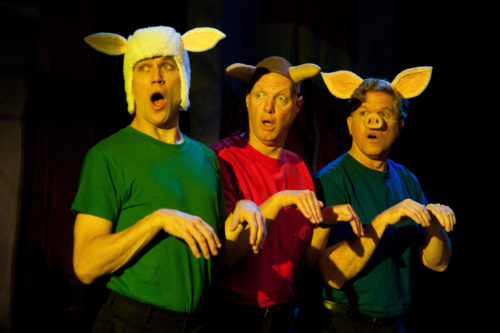 There’s a difference between rehearsing and performing and this week actors Dan Saski (left, with Chad Yarish) and Austin Tichenor, plus stage manager Elaine Randolph, talk about the specific challenges of touring a show with multiple combinations of actors to different venues around the country. Featuring unabashed fondness for The Ultimate Christmas Show (abridged), many comings and goings, the trick of doing a show you can only perform 4-5 weeks a year, unconventional processes, how much preparation can you actually do without the other actors, what’s language-driven and what’s movement-or-music-driven, incorporating new technicians in every city, speedy backstage changes captured on video, keeping theatre a living thing, how sometimes the lack of preparation brings magic, and ultimately the joy of seeing what different actors bring to the same roles. (Length 21:48)