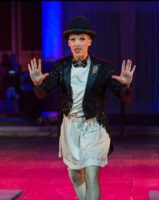 Matt Walker (left) is the founder and artistic director of the Troubador Theatre Company, the LA-based ensemble that combines classic texts with classic Top-40 songs to create such astonishing mashups as Much A-Doobie Brothers About Nothing, The Comedy of Aerosmith, Fleetwood MacBeth, Santa Claus is Coming to Motown, The Little Drummer Bowie, Julius Weezer, Abbamemnon, As U2 Like It, A Christmas Carole King, Hamlet – the Artist Formerly Known as Prince of Denmark, A Midsummer Saturday Night’s Fever Dream, and It’s a Stevie Wonderful Life. The Troubies’ most recent magnum opus, which just closed its sold-out run at LA’s Getty Villa, was Lizastrata, which combined Aristophanes bawdy political comedy with music associated with Liza Minnelli. Matt explains how “The Troubies”, after more than 18 months, finally made the show go on; hired a COVID Compliance Officer; got advice from classical scholars; received letters anyway from “concerned” patrons; held a funhouse mirror up to nature…and hung it over the bed; and were visited by royalty: the Divine Miss Liza with a Z herself. BONUS! Austin reveals how Kander & Ebb’s “New York, New York” became the official anthem of New York City. (Length 25:29) 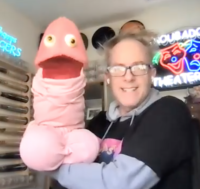 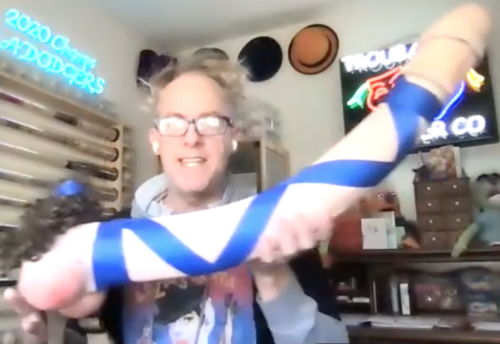 Three members of the fantastic ensemble gathered together for the Goodman Theatre production of Theresa Rebeck’s Bernhardt/Hamlet – William Dick, Gregory Linington, and Larry Yando – gather to discuss the particular obligations that must be considered when playing real historical figures. Featuring extensive dramaturgical research, actual archival video, the wild imaginative leaps required to be able to portray a 19th-century critic as if he were human, tributes (or ripoffs?) from Trader Joe’s, the invention of merch, arguments about Hamlet’s age, similar pressures playing the famous historical figure Ebenzeer Scrooge, the ultimate dedication to the playwright’s text, and a play ostensibly about a diva that’s actually about an ensemble. (Length 22:43) (Pictured (l to r): William Dick, Larry Yando, and Gregory Linington in the Goodman Theatre production of Theresa Rebeck’s Bernhardt/Hamlet, directed by Donna Feore. Photos by Liz Lauren.) Playwright Sara Gmitter talks about her new play In The Garden: A Darwinian Love Story (now getting its world premiere at the Lookingglass Theatre Company in Chicago), which explores the long and successful romance between Charles and Emma Darwin: A woman who believed in God and heaven and salvation — and the man who wrote The Origin of Species. Featuring rehearsal discoveries, the challenges of titles, the value of comedy, the importance of respect, making the intellectual emotional and the political personal, balancing the absurd with the tragic, Hollywood taglines, and a surprisingly rare sympathetic portrayal of a person of faith. (Length 22:17) We share thoughts about comedy with director William Brown, who talks about his Writers’ Theatre production of David Ives’ The Liar which is earning rave reviews this month in Chicago. Featuring the joys of being at the epicenter of the action, the advantages of actor investment, the truth about technique, the differences between Moliere and Corneille, jokey distinctions between actors from different cities, the tricks of casting, a special appearance by Olivier Award-winner Tim Minchin, an appreciation of the American Conservatory Theatre training program, excerpts from the BBC World Service production of the Reduced Shakespeare Radio Show, and the most underrated aspect of Chicago’s theatrical history. (UPDATE: Bill won the 2013 Joseph Jefferson Award for outstanding direction of a play for this work on The Liar.) (Length 20:00)

The four gentlemen of the 2013 cast of The Complete Works of William Shakespeare (abridged) [reduced] — Gary Fannin, Matt Pearson, Matt Rippy, and Benjamin Stratton — share their backgrounds and expertise as they prepare for their twelve-week UK tour. Featuring a surprisingly fast sense of ensemble, the joys of doubling, the perils and pitfalls of understudying, the benefits of combining veterans and newbies, finding new truths, the current status of Paul McCartney’s old school, and definitive American and British accents. (Length 23:49)

When Reed Martin and Austin Tichenor directed the non-RSC cast in the premiere of The Ultimate Christmas Show (abridged), Kyle Stoner, Phil Ferrero, and Rafael Manzo were the understudies, and they talk about what it’s like to rehearse a script that’s still being written, and when improv works and when it doesn’t. We’ll also hear from Jennifer King, artistic director of Napa Valley Conservatory Theatre, and our own Reed Martin, who shares his understudy adventures. (Length 21:10)

“We take a break from rehearsing The Complete World of Sports (abridged) to recall our various moments of sporting glory…and some moments of humiliation as well. Featuring last-minute victories, unexpected emotion, a special appearance from Modern Family‘s Eric Stonestreet, and a brief quote from Bill Cosby. (If you spot it, leave a comment!) (MP3. Length 21:38)

“Austin Tichenor and Reed Martin are writing The Complete World of Sports (abridged), which the Reduced Shakespeare Company will premiere in September 2010. But they’re in rehearsals now, directing a non-RSC production in California. They talk about this unusual process, and about the wisdom of playwrights directing their own work. Featuring keen insights, mild inarticulation, and a special appearance by Michael Faulkner reading one of his topical limericks from TopicalLimerick.com. (MP3. Length 20:09)