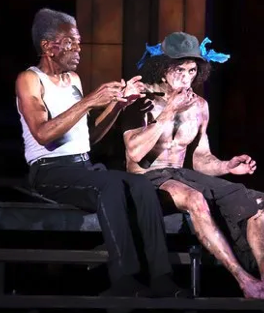 Daniel José Molina (who’s appeared on the podcast discussing his performances of Hal in both parts of Henry IV and Henry V), discusses playing the even more difficult role of Edgar in the St. Louis Shakespeare Festival production of King Lear starring Andre De Shields. Daniel reveals the challenge of playing a purely reactive character; the value of recognizing that Edgar only realizes when it’s almost too late what play he’s in; the trick of honoring Shakespeare’s intent to make ‘Poor Tom’ a crude performance, not a Daniel Day-Lewis transformation; the tricky irony of when performed mental illness meets genuine decline; gives a shout-out to Leland Fowler, who played one of the best bastards ever; a special appearance from Netta Walker, one of the stars of the upcoming CW series All-American: Homecoming; a preview of Daniel’s next Shakespeare challenge; and, ultimately, how Edgar is actually four or five characters in one. (Length 24:18)