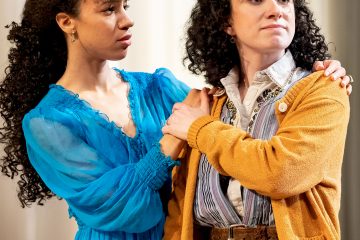 Shana Cooper discusses her direction of one of Shakespeare’s infamous “problem plays,” All’s Well That Ends Well, which ran (quite well!) at Chicago Shakespeare Theater in the spring of 2022. Shana reveals how the project came to her; how the options of possible plays narrows considerably when you’re completing the canon; how a play about deeply flawed people at transitional points in their lives matches our historical moment; the vital importance of casting a sympathetic center in your leading role; how her next production is that light-hearted romp Metamorphoses at Seattle Rep; how Bertram typifies the annoying number of fraught men and boys in Shakespeare; and ultimately the importance of finding allies in transitional moments and identifying your next version of Home. (Length 21:40) (PICTURED: Diana (Emma Ladji) and Helen (Alejandra Escalante) in the Chicago Shakespeare Theater production of All’s Well That Ends Well, directed by Shana Cooper. Photo by Liz Lauren.) 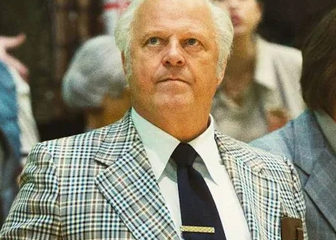 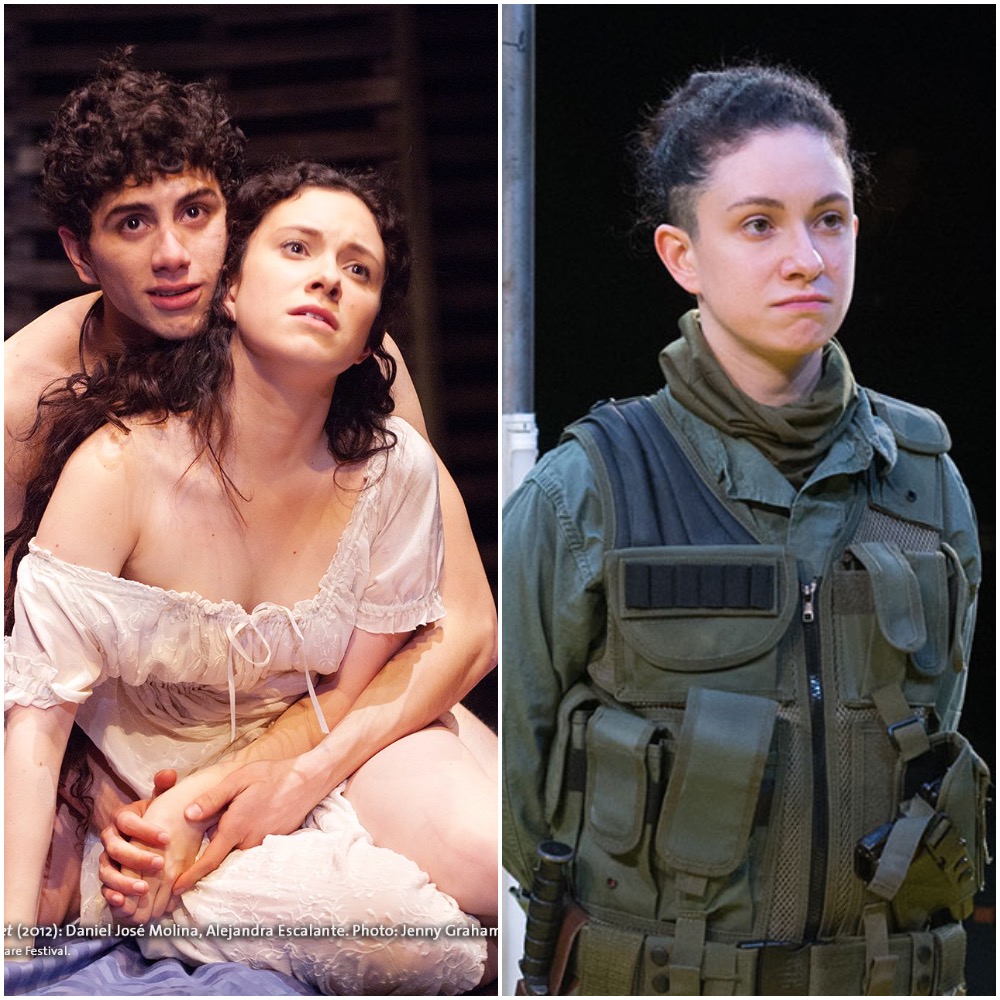 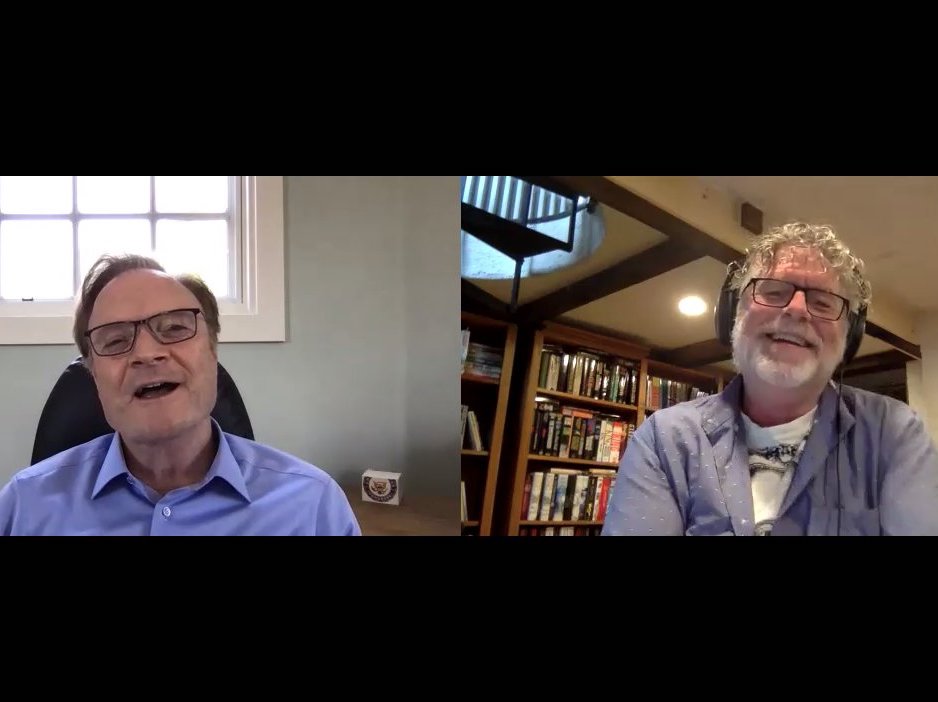 We continue our conversation with the host of MSNBC’s “The Last Word,” Lawrence O’Donnell, who talks about Mister Sterling, the show he created that starred Josh Brolin as a newly-appointed senator from California who everyone assumes is a Democrat. Lawrence shares behind-the-scenes tales of TV production; his favorite bits of direction; the real-life sources of drama and inspirations for fictional characters; the identity of the so-called “101st Senator;” how actors remember forever the parts they don’t get; how casting sessions work (and don’t work); games senate staffs play; shout-outs to great and important mentors; the possibilities and challenges of rebooting Mister Sterling or any shows like it; the extraordinary journey it took to realize multiple Tony-winning actor Audra McDonald was right for a role; things you can still shoot in quarantine; and, in a 17-year-old journalistic coup — and after 700 episodes — Finally! The RSC Podcast has its first scoop! (Length 34:06) (NOTE: Click through to find links to Part One of this interview.)

Peter Marks, theatre critic of the Washington Post and co-host of American Theatre magazine’s Three on the Aisle Podcast, famously loathes the song “Shipoopi” in Meredith Willson’s The Music Man and this week we try to convince him just how wrong he is. Featuring strong emotional reactions; unworthy yet sophisticated analysis; unprovoked disdain of garden gnomes; pilgrimages to Mason City, Iowa; reverse snobbery; comparing Act Two openings; anthropomorphizing a month; ideal Harold Hill casting (the less said about Matthew Broderick, the better); and ultimately a celebration of one the American musical theatre’s greatest (give or take a song or two) shows. WARNING: No minds were changed in the recording of this podcast. (Length 20:13) (Pictured: Jonathan Butler-Duplessis as Marcellus Washburn in the Goodman Theatre production of Meredith Willson’s The Music Man, directed by Mary Zimmerman. Photo by Liz Lauren.)

”Our good friend Howard Sherman remembers his good friend A.R. Gurney, the celebrated playwright and so-called “chronicler of contemporary America’s most unfashionable social stratum — upper-middle-class WASPS” (according to Frank Rich), who died this week at the age of 86. Howard talks about Gurney’s work and style, both onstage and Read more… 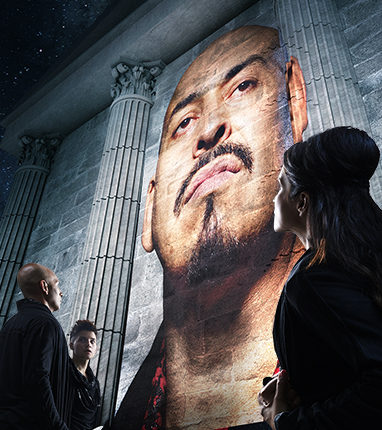 ”The most recent addition to the Reduced Shakespeare Company, Jason Ryan Lovett, talks about his dream roles, his acting background, the differences between knowing your lines on stage and in your kitchen, transposing pop-culture characters into Shakespeare plays, being a member of The Actors’ Gang, sacred British and American roles, Read more…

”Emmy-nominated Casting Director Sandi Logan (Cristela, Monk, Boomtown, several tours for the Reduced Shakespeare Company) talks about the business of casting film and television, and the alleged ‘Crisis in American Acting’ (find the link to the essay that talks about this here). Featuring the differences between American and British actor training; the Read more…

”You always remember your First Time. So do we. Memorable first RSC performances are recalled this week, with special emphasis on line flubs, urgent calls of nature, and sexual objectification. Plus, a special appearance by big-time Hollywood casting director Debra Zane. Ready for our close-up now, DZ! (MP3. Length 19:34)