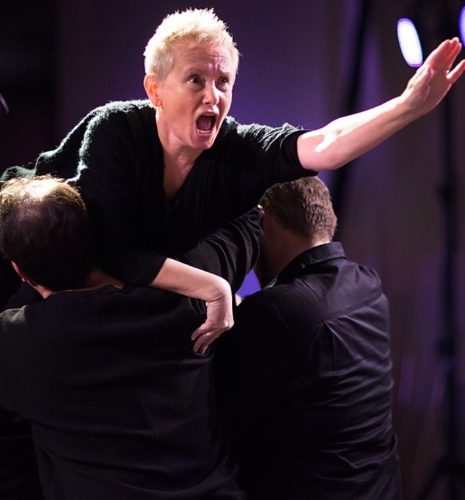 Dan Beaulieu and Christine Penney are the co-founders and directors of the Seven Stages Shakespeare Company, New Hampshire’s only year-round dedicated to performing the works of Shakespeare or pieces that illuminate him. Seven Stages engages with Shakespeare in a variety of contexts, including performances, readings, workshops, and podcasts, and as Christine and Dan explain the company’s mission and objectives, they talk about swimming where the fish are, such as in in parks, bars, theaters (sometimes), barns, and warehouses; give shout-outs to influential professors; reveal how musical theatre performers are frequently excellent Shakespeareans; celebrate Shakespeare with a morning zoo/sports talk-radio energy; compare Brooklyn neighborhoods; and finally — beautifully — share what happens when you get to the sixth and seventh stages of Shakespeare. Recorded LIVE at the Shakespeare Theatre Association Conference in Dallas, January 2020. (Length 20:23) (Pictured: Deb Kinghorn as Lear in the 2016 Seven Stages Shakespeare production. Photo by M. Lavigne Photography.)