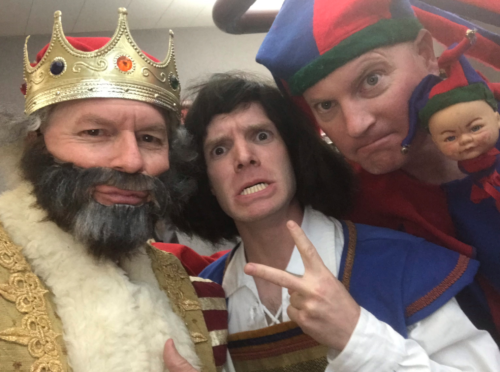 Meet Doug Harvey (center, above), the newest member of the RSC and also the author and star of the one-man show The Time Traveler’s Guide to the Present, which earlier this summer won the Paul Koslo Memorial / MET Theatre Award at the Hollywood Fringe Festival. Doug reveals his RSC origin story and shares some live musical spaghettification; his feelings about the need for adventure and more shows about science; how a one-man show became a sci-fi romance; day gigs at LA’s Griffith Observatory; references to the darkest timelines; a couple of harmonizing triads; the Michael Faulkner conduit; growing up with Bay Area theatre like California Shakespeare Company and American Conservatory Theatre; tales of successful auditions; the importance of serious clowning; and the answer to the ultimate question: What’s the closest we have to a time machine? Not a Delorean, not Bill and Ted’s phone booth, but…a theatre. (Length 21:29) (Pictured: Austin Tichenor as the King, Doug Harvey as Hamlet, and Chad Yarish as Yorick in the Reduced Shakespeare Company production of Hamlet’s Big Adventure! (a prequel).)